EASTCHESTER, NY (June 10, 2021) - Frank Esposito got off to a rocky start in the 41st U.S. Senior Open Final Qualifying Round at Leewood GC after beginning his round with a double bogey-6 and carding his front nine with a 39 (+4). "I was not hitting the ball well on my first nine" commented Esposito after the round. The New Jersey native and Golf Instructor at Forsgate CC, has had plenty of competitive experience to know that the round isn't over until it's over. "I shot +4 on the first nine but knew I had nine more holes left, that's the beauty of golf". Esposito leveled off his game on his second nine after starting par, birdie. With 7 holes left, Esposito found himself at +3, 4 shots off the lead and outside of the projected qualifiying spots. When he stood on the tee of the par 3 6th hole (Esposito's 15th hole), he knew he had to make a move. Esposito then proceeded to make back-to-back birdies on 6 and 7 to get his round to +1 to take a share of the lead. Standing on the par-4 8th hole, Esposito could only dream of what would happen next. On his approach, Esposito holed out his shot for an eagle 2 to get to -1 for the day, taking the solo lead. After finishing his round with a par, Esposito was the leader in the clubhouse. Esposito went on to win the Qualifier by 1 shot over Michael Laudien of Stony Point, NY (left) and Bobby Gage of Boynton Beach, FL (right). The 3 competitors claimed the 3 qualifiying spots for the 41st U.S. Senior Open 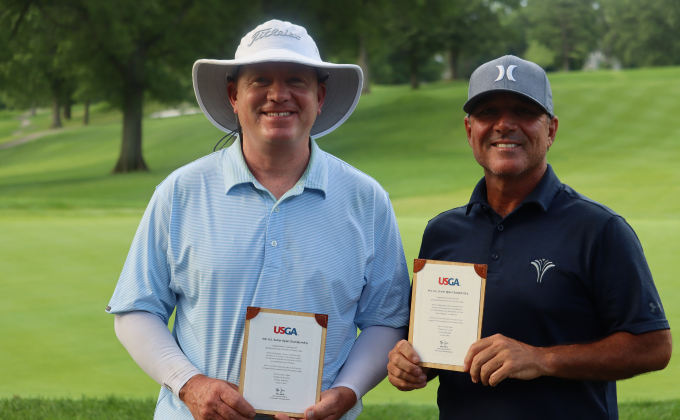 *Photo Credits: Metropolitan Golf Association*
"It feels good to qualify for the 41st U.S. Senior Open especially after not a great start today. I'm excited to play in Omaha next month and I'm looking forward to the challenge" said Esposito after his round.

Esposito, along with the 2 other qualifiers, Laudien and Gage, will compete in the 41st U.S. Senior Open at Omaha Country Club from July 8-11. We wish Frank the best of luck as he represents the New Jersey PGA next month at the U.S. Senior Open!