Nick Bova of Anchor Golf Center took a different approach than most PGA Professionals heading into the New Jersey PGA’s second major of the season.

Instead of playing a practice round at Rumson Country Club, the 33-year-old went into the week with little course knowledge. 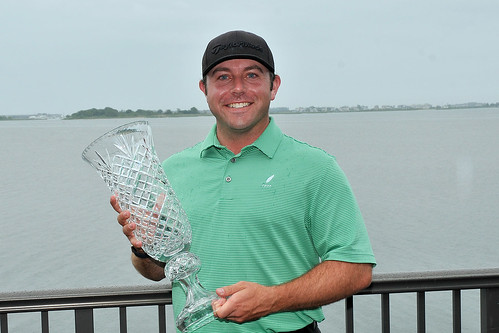 â
“I weirdly have success going to a place having not seen it before,” Bova said. “I tried to play with what the golf course gives me and I went in with no expectations.”

That strategy worked, as Bova shot a 70-68-67 205 (8-under) to win the Lincoln Charity Clambake presented by Titleist, FootJoy, Tito’s Handmade Vodka and Lawley Insurance by four strokes.

“This is definitely my biggest professional win,” Bova said. “New Jersey has some of the best PGA Professionals. I’m excited for what’s to come.” Bova, who was a member of the Metropolitan Section prior to joining the New Jersey Section this year, said this is his third professional victory. In 2013, he won the 36-hole Metropolitan PGA Assistant Championship.

“This is probably close to the lowest I’ve ever been,” Bova said of his three-day performance.

Nick Bova of @AnchorGolfCtr misses a birdie try on the 18th, but wraps up a final round 67 and currently holds a five-stroke lead at the @LincolnMotorCo Charity Clambake: https://t.co/V07kCubJUu pic.twitter.com/yT2URr0vOK


For majority of the round, Bova elected to use his three-iron off the tee, which put him out of trouble. He carded only one bogey in the final round.

“I hit a lot of really good crisp iron shots this week,” Bova said. “I haven’t been hitting my driver very well and my goal was to just put it in the fairway since it would take a lot of stress off.”

Early in the round, Bova was in a three-way tie with Trump National Golf Club Colts Neck’s Bill Britton and White Beeches Golf and Country Club’s Jim McGovern through six holes at 5-under. Britton had a hot start, making his 11th hole-in-one in his career on the par-3 third to quickly move up the leaderboard. But Bova strung together a pair of birdies on No. 9 and 10 to pull away from the field entering the final stretch.

Nick Bova of @AnchorGolfCtr picks up a birdie on hole No. 9, moving him back into the lead at 5-under: https://t.co/V07kCubJUu pic.twitter.com/qrHkDRJIQ1


For the fourth straight year, Alex Beach of Baltusrol Golf Club finished inside the top-five, placing second at 4-under. Beach won the gross division in a playoff with his partner, Jeff Werring, while Britton, who finished in a tie for fourth at even, won the net division with Rich Mulvey. McGovern, who entered the final round with a one-stroke lead, finished in third at 1-under.